The size of the chlorine dioxide gas molecule is 0.124nm, which is much smaller than that of microorganisms and viruses. Anywhere these microorganisms are hidden can easily enter.??????

The chemical properties of chlorine dioxide are fundamentally different from those of chlorine.

When chlorine dioxide reacts with other substances, it is weaker and more selective, making it a more effective sterilizer.

Chlorine dioxide, for example, does not react with ammonia or most organic compounds.

Chlorine dioxide is not oxidizing, unlike chlorine, does not chlorinate products.??????

Chlorine dioxide does not produce organic compounds containing chlorine which are undesirable for the environment.

Chlorine dioxide is also a yellow-green gas that can be seen with the eye, so it can be measured with a photometer.

Chlorine dioxide has the properties for sterilizing, bleaching, deodorizing, disinfecting. The mechanism of action is mainly oxidation, the electronic structure of the chlorine dioxide molecule is unsaturated. There are 19 electrons in the outer layer, which act as a strong oxidizing power, and is mainly used for atomic groups rich in electrons (or electron donors). Enzymes and thiol sulfides, chlorides) achieve this by forcibly looting electrons, inactivating and altering properties.????????

1. Sterilization Mechanism
Chlorine dioxide has a strong ability to absorb and penetrate cell walls, and to release oxygen to oxidize thiol-containing enzymes in the cell, and exerts a bactericidal effect.

2. Bleaching effect
Bleaching of chlorine dioxide is the release of atomic oxygen and the formation of hypochlorite, which degrades the pigment. When used as bleach instead of chlorine, chlorate, etc., it can prevent and avoid the oxidation of the fiber and reduce the strength of the fiber, so the effect is more understandable.

3. Deodorizing effect
Indeed, the deodorization of chlorine dioxide can be dehydrated with odorous substances (for example H2S, -SOH, -NH2, etc.) and oxidize quickly and convert odorous substances into other substances. It can also prevent methionine from breaking down into ethylene and destroy ethylene, which can delay the breakdown of food without destroying food structures, reacting with fatty acids, and killing microorganisms. 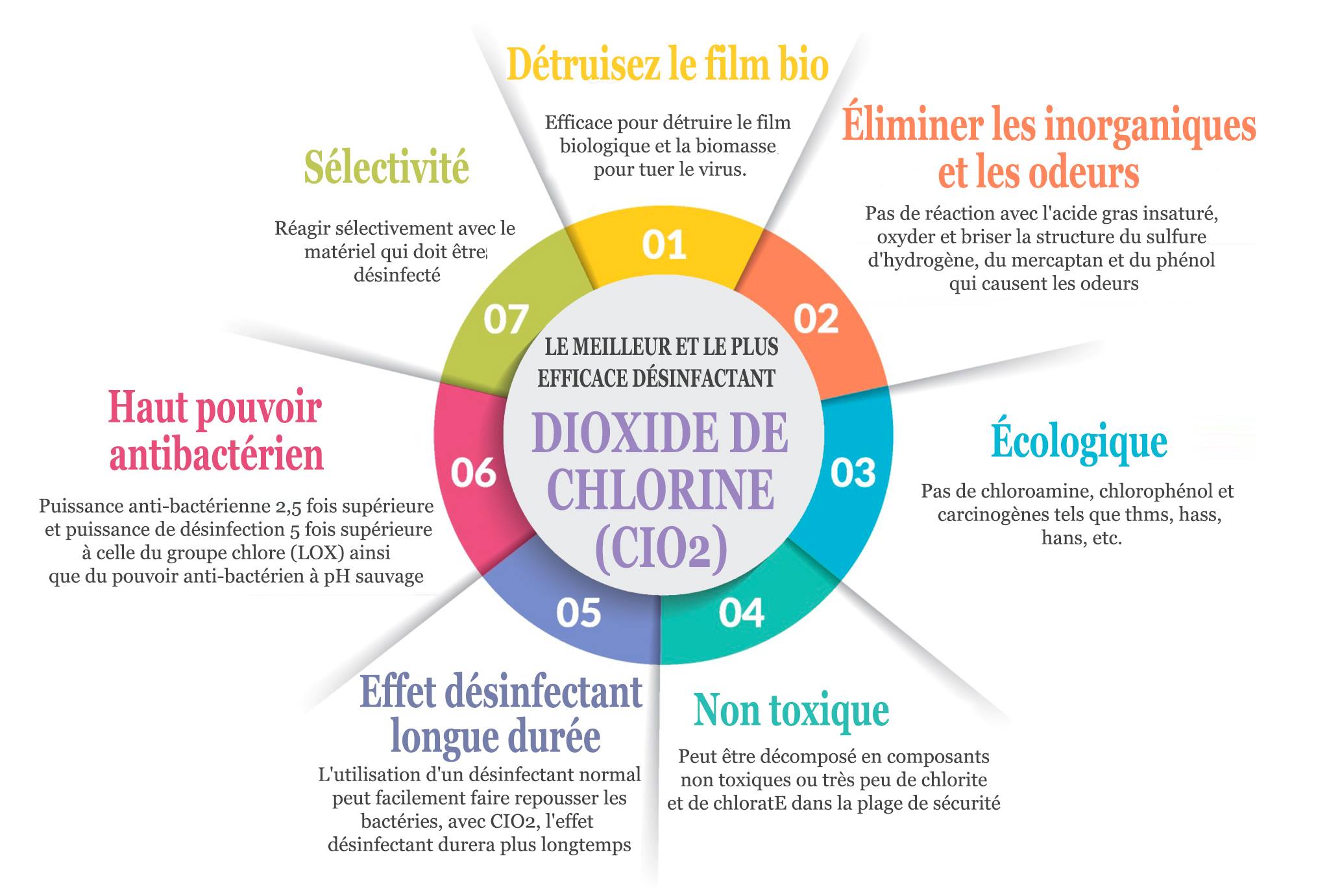 Background: Chlorine dioxide (CD) has strong antimicrobial activity at extremely low concentration and may serve as a novel infection control tool both professionally and publicly. However, it remains unknown whether chronic exposure to a concentration of CD gas effective against microbes is safe. Therefore, in the long term, the low inhalation toxicity of CD gas was studied in rats as continuous whole-body exposure for six months followed by a two-week recovery period, in order to prove that CD gas exposed up to 0.1 ppm (volume ratio) is found to be safe based on a battery of toxicological reviews.

Methods: 0.05 ppm or 0.1 ppm CD gas for 24 hours / day and 7 days / week was exposed to rats for 6 months under unrestricted conditions with free access to food and water in a chamber to simulate the ordinary way of life in humans. Control animals were exposed only to air. During the study period, body weight as well as food and water consumption were recorded. After the 6 month exposure and the 2 week recovery period, the animals were sacrificed and a battery of toxicological examinations, including biochemistry, hematology, autopsy, organ weights and histopathology, were executed.

Results: Well-regulated levels of CD gas were exposed throughout the chamber throughout the study period. A sign of non-toxicity related to CD gas was used throughout the study period. No significant difference was tested in body weight gain, food and water intake, and relative organ weight. In biochemistry and hematology examinations, the changes did not appear to be related to the toxicity of CD gas. On autopsy and histopathology, no CD gas-related toxicity was verified even in the expected target respiratory organs. Conclusions: CD gas up to 0.1 ppm, exceeding the level effective against microbes, exposed in the body of rats continuously for six months was not toxic, in a condition mimicking the conventional lifestyle in the man.

We demonstrate that the aerosol-induced infection of mice from influenza A virus was prevented by chlorine dioxide (ClO2) gas at an extremely low concentration (below the exposure level of humans, i.e. 0.1 ppm). Mice in semi-closed cages were exposed to aerosols of influenza A virus (1 LD50) and ClO2 gas (0.03 p.p.m.) simultaneously for 15 min. Three days after exposure, the pulmonary virus titer (TCID50) was 102.6 ± 1.5 in five mice treated with ClO2, while it was 106.7 ± 0.2 in five mice that did not had not been (P50,003). The cumulative mortality after 16 days was 0/10 mice performed with ClO2 and 7/10 mice not performed (P50.002). In in vitro experiments, ClO2 denatured the proteins of the viral envelope (hemagglutinin and neuraminidase) which are essential for the infection of the virus and abolished the infection.

Taken together, we conclude that ClO2 gas is effective in preventing aerosol-induced influenza viral infection in mice by denaturing viral envelope proteins to a concentration well below the allowable exposure level for humans. ClO2 gas could therefore be useful as a preventive measure against influenza in places of human activity without requiring evacuation.